The Wolf Spider are very agile and they move quickly. They are active and they seem muscular. Like all Spiders they tend to do well living around. Their name comes form the fact that their face does look wolf like when you view it up closely.

This particular species of Spider has 8 eyes. They have three rows of eyes and they vary in size by row. They have a very good sense of touch that allows them to work all of their senses together. The colors vary often depending on which part of the habitat that they happen to be living in. They will blend into their surroundings as camouflage.

The Wolf Spider lives in many regions around the world, with the largest ones being around North Carolina. Those can have a body that is about 1 inch long, while in many other places that are about half that side. They are often found living in pastures and fields. They have a very important role there as it helps to keep the population of insects under control.

You will find them living inland as well as around the coasts. They are also found in suburban areas. There really isn’t a place where they won’t live though as long as they can get food. They are considered to have one of the most diverse distributions of all Spiders. 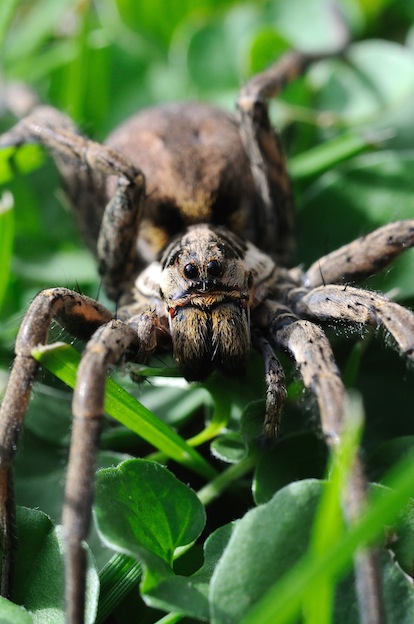 It isn’t uncommon for them to dig deep burrows where they will spend lots of time. They are very intelligent and may put a trap door on that burrow. This can be a very cleaver way to trap prey. They use pebbles to block holes too so that they don’t get any rain in their burrow.

Other Wolf Spiders will hide out under rocks and other elements they can find in nature. You will have to look hard for them to find them. When the temperatures turn colder though more of them seem to be found around homes and garages.

The have been seen chasing prey for short distances. They will also pounce on it from a location where they have been patiently waiting for something to come along. Some of their food sources include flies and crickets. They have a flexible abdomen so they can eat lots of food when they have the opportunity. However, they can also slow down their metabolism when food is in short supply.

The males are attracted to the females due to her scent. She may accept such advances or she may make him go away. The females can be aggressive so the males come along timid and ready to please. They may dance or do other rituals to be able to get her to calm down.

The females will carry the egg sacks with them. They attach them to the spinerettes. This is a very unique trait. It looks like a very shiny white silky area at the end of her body. She will have to walk holding her abdominal area up so that the egg sack won’t be damaged by dragging on the ground.

When the young are born they are able to catch a ride on the back of their mother. This helps them to remain hidden from potential predators. If it is very windy the young will be blown off. This can contribute to them having such a wide distribution.

The Wolf Spider has been known to bite. Those found in the USA don’t seem to cause more than just some pain that will away in a few days. In some locations though it is necessary for medication to be given. The area may swell up and become itchy which is a sign that medical attention is needed. However, they are considered to be of very little threat to the human population, but if the bite is not treated, can result in necrosis.