Spiders have many predators in their natural habitat. As a result they have many methods of being able to defend themselves. They aren’t very fast when you consider most species so they have to compensate for it. They are able to blend well with their environment as a form of camouflage that is why they offer so many spectacular colorations.

There can be multiple colors found on any particular type of Spider. This makes it hard for any predator to recognize what species it may belong to. As a result the predator isn’t going to take the chance that it may be one that could be potentially fatal to them. The predator is more likely to venture off than to take such a risk.

Some spiders actually taste really terrible! They won’t be eaten by predators because they simply don’t taste good. Many experts believe that this is a type of defense that they are able to use in order to survive The downside to this though is that they may be severely injured before the predator realizes that fact.

There are many fine hairs on the body of the Spider. They may use their abilities to flick hairs at their enemies. That can be very irritating and even alarming to a predator. This often causes them to run off and to leave them alone.

Since Spiders don’t have muscles in their legs they use hydraulic power to be able to move. Many species are able to jump many times their body size. This can help them to get out of their predicament in no time at all. That jumping distance can make up for them not being able to run fast.

The webs of Spiders offer a natural type of defense for them. Many times their predators will get caught up in them as well as their prey. This can help them to stay safe from harm. They have a hub in their webs too that can offer them a safe place to retreat if they get the impression that danger is lurking around them.

Of course the top defense that most of us think of with the Spider is the venom. They have sharp teeth that are able to quickly penetrate into the predators that are bothering them. That venom will immediately kick in and make them ill, immobile, or kill them. This is the most powerful type defense mechanism that the Spider has. 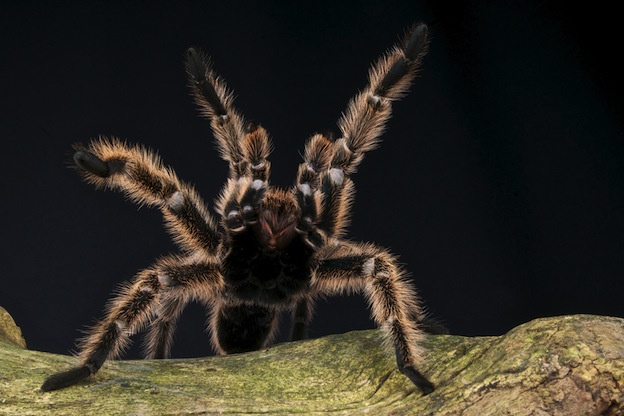 Many characteristics for defense have evolved over time. The given predators in a particular location will influence what is done in order to help the Spiders remain free from them. They are very good at hiding too and that makes them hard to get to. They can hide under rocks and many other locations where predators simply can’t get to them.

There are species that have a spiked type of armor on them. This will prevent some predators such as birds from being able to kill them. It is believed that many of these defense mechanisms for them are the result of evolution. That could be why some types of Spiders are able to so well in the wild and others struggle.

Size isn’t always important either when it comes to the defenses of a Spider species. Some of the smaller ones definitely know how to hold their own successfully. If you are interested in learning more you can study specific species of Spiders. By identifying where they live and what they do to depend themselves you can get a good idea of what life is like for them on a daily basis.