How do they eat? They use the venom they inject into prey to help deteriorate it. Then they are able to suck the flesh and the tissues out of it and use that for food. It causes the prey to start to liquefy from the inside out. They will leave the outer shell of their prey behind. This is often going to be a food source for other types of living things out there.

Spiders only use the biting and the venom to make their prey immobile. They use their body to grind up the prey and then they can eat. They will spit the enzymes from deep in their gut area onto the prey. They allow this to sit for a few minutes until it becomes soft enough for them to suck it all up. They have a complex filtering system in place so that solids can’t reach into their gut. This is important so that they are able to avoid digestive problems.

They are usually looked at in regards to being predators. Yet there are some that are able to consume from plant materials. This is a type of relationships that is very beneficial for the environment. It is believed that some of the young with various Spider species feed on nectar. This helps them to have proper nutrition at a young age. They tend to prefer sugar water and they are in need of adequate nutrition. Spider feeding usually takes place at night when they are predators. However, for those that are after plants or nectar they are going to be active during the day. 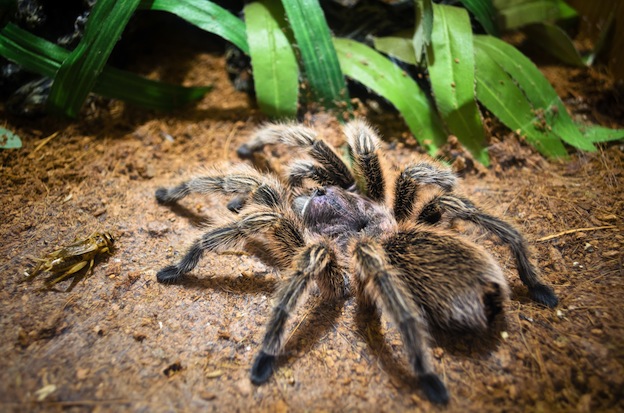 Tarantula and their next prey

There are studies to show that Spiders eating nectar are healthier and tend to live longer. They don’t have the same risks as those that continue to have to produce enzymes for the digestive process. Spider feeding can occur on items that are found dead too. They are opportunistic so they won’t just eat what they find in their web. Most of the time a Spider will rush to the web and eat what is trapped. This is to reduce the chances of it being able to get away and then there is no meal for that Spider. When they come across dead insects though they will definitely eat them.

They don’t want to risk not being able to find enough food later on. They will also consume their webs that they have removed to build a new one. They will roll it up into a ball and then suck it up. Some species of Spiders are known to consume the remains of their exoskeleton. This is what they will shed when their old skin comes off and the new skin emerges. It is believed that it offers plenty of nutritional value for them. However, it could also be a way to help reduce smells that may attract various types of predators.

There isn’t a set amount of food that they have to eat. They will eat in abundance when it is plentiful. They will also be able to go for several days without anything at all. This is all part of why they are able to survive in many different types of environments out there. There have been studies to show that some Spiders will eat various forms of human food. This includes egg yolk, sausage, and even marmalade.

One species of spider in the world has been identified as a mostly herbivore: Bagheera kiplingi.