There are more than 500 different genera of jumping spiders family and around 5,000 species. This is approximately 13% of all spider species in the world. They don’t seem to scare easily but the fact that they can jump does tend to scare many people. They aren’t sure of where this Spider is going to land.

This is one of the few types of Spiders that does have excellent vision. They have four pairs of large eyes. They have three rows of eyes that help them to see what all is around them.

They also have lungs and a tracheal system that are well developed. They function through a process called bimodal breathing. They feature thousands of small hairs that allow them to have traction for climbing up terrain – including glass.

There are many places out there that the Jumping Spider calls home. This includes all types of forests, grasslands, and some mountain locations. They have been found around the famous Mount Everest. As long as they have enough food and shelter they will be able to survive in  given location. 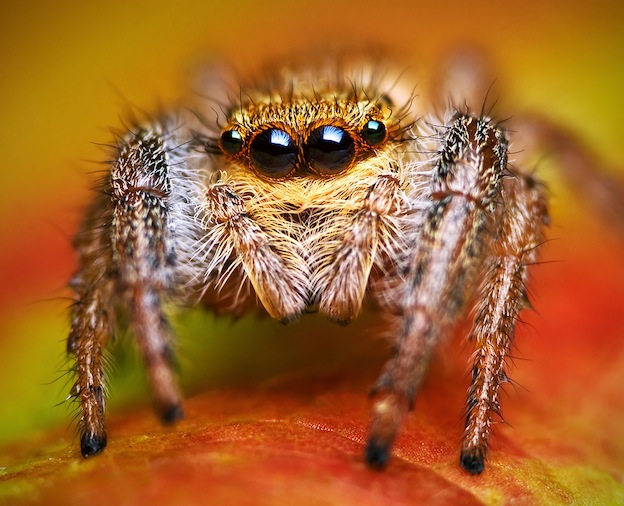 The Jumping Spider is able to leap up to 50 times its size. They use a tether of silk that they produce from their bodies to do so. They are able to use the hydraulic movement of their limbs in spite of not having muscles in their body to do so. They do have to stop now and then to be able to readjust their blood pressure.

They are very curious by nature too. This is why they will leap when a human places their hand out. However, they may jump backwards too so that they can get enough distance from that object. They stay focused for long periods of time on what they approach too.

You will find the Jumping Spider moving around during the day. Generally the availability of food resources will determine when they will be active. They do what they can to get the best opportunities.

They are very active hunters so they don’t have a web (in most of the species) and then sit around and wait. They track prey for quite a distance and plan a strategy. They will quickly pounce with the element of surprise on their side. Then they are able to quickly bite which injects the venom. They consume a variety of insects, bugs, and they also will consume other species of spiders. They are also know to consume both pollen and nectar.

The males tend to be more colorful than the females and they are also smaller. It is believed that these color differences allows the males to be more attractive to females for mating purposes. The males will do dances that move around in a zig zag position. Sometimes two males want to mate with the same female. If so they will both dance for her. She may select one of them or neither of them. If she is receptive then he will deliver sperm for the eggs.

Due to the fast movements of this Spider and its leaps, it is often thought to be dangerous to humans. It won’t run off either but that isn’t aggression but rather curiosity. A bite from such a Spider isn’t’ dangerous for most of the population. However, there are some people who may have an allergic reaction. They need to seek immediate medical attention.