The Golden Silk Spider is also known as the Giant Wood Spider. They create silk coloring that is gold which is very different from other types of Spiders. This is where their name comes from. This may be a benefit that allows their webs to be more attractive. They do look aggressive but there is no real evidence to suggest that is true.

They can be reddish or greenish yellow in color. They also have patches of white along the abdomen. The legs are striped with white as well. They may be brown and black too and all of these colors allows them to blend into their surroundings quite well.

Due to the many colors though they are often mistaken for various types of Spiders. The females are about 2 inches when fully mature. The males are usually about 1 inch. The overall size though often depends on the location.

You will find the Golden Silk Spider all over the world in the warmer climates. Both Australia and Madagascar are two places where they have the highest numbers. They are able to live in the USA too along the North Carolina area into Texas.

They are often found around plants and flowers. Many humans put out pesticides to kill them because they are a pest in their garden locations. However, this can also result in serious problems for the environment.

These Spiders create a very interesting zig zag pattern into their webs. They are also the only species of Spider to make a golden coloring. They can change the pigment of it too so that it works well for them based on their location. These webs are done over each and every day for the Golden Silk Spider.

They don’t have good vision so they rely heavily upon their senses. They have very good abilities to pick up on vibrations. They may jump or run when they know that danger is present. They will usually only stay to fight if they have no other choice.

The diet for the Golden Silk Spider is made up of insects that are either small or medium in size. They can include moths, mosquitoes, flies, butterflies, grasshoppers, and even small snakes. They will consume what they can easily find in their environment. What they eat can also change depending on the time of year. 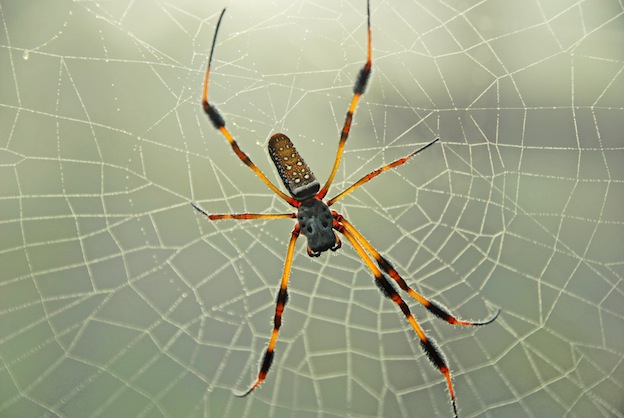 The mating process for the Golden Silk Spider begins after the females have molted. This will make them more receptive to the males. Otherwise they would be too aggressive for them to be around the females. The males have to keep her happy too with various rituals. If she gets angry then she will very likely kill and eat him.

The males will release sperm that the female will place into her body. This is going to all the eggs to form. She will only live about 27 days after the final molting period. Her young will be born on their own and have to find a way to instinctively do well. This is why they have such a high mortality rate.

Even though the Gold Silk Spider has a powerful venom, they don’t make as much of it as some other Spiders. A bite from one can cause a great deal of pain though as well as some blistering. It is very rare for someone to have to go to the doctor for such a bite. If a person is having severe cramping or a hard time breathing then they should go to a doctor as that is a sign of infection.