You may have heard about Spiders called the Sun Spider or the Wind Scorpion. However, their popular name is the Camel Spider. Yet the debate continues by experts about them. Are they really Spiders or are the Scorpions? For now they will stay in this classification but future research may cause them to be moved.

One argument people make is that this Spider features 10 legs. While it may certainly look that way it isn’t so. What they do have is very long pedipalps that allow them to use the benefits of sensory persecution. They are longer than in other species of Spiders. They also do look very similar in terms of size and length to their limbs.

This particular Spider can grow from 3 to 6 inches long. They are well developed internally, more so than most other species of Spiders. This is one more reason why some don’t think it is really a Spider. They feature very large eyes and the males are extremely small in size compared to the females. Many people think they are seeing young ones when they are actually viewing fully mature male Camel Spiders.

You will find them in a range of colors from tan to dark brown. They have a tendency to really blend in nicely with their surroundings. That is what will have a huge influence on the coloration that they display. They often have black on the tips of the limbs as well as under the abdomen.

This is one species of Spider that is often hard to find. Not only do they blend well with their surroundings, they like to hide. They may be found in any dark area such as a crawl space or a shed. They can also be found under piles of boards or even rocks. People that have piles of clothing and other items in their homes may be making the perfect habitat for them as well.

When it comes to speed the Camel Spider is said to be among the fastest. They are able to move about 10 miles per hour. However, they typically move much slower than that unless they feel that they are in danger and have to get out of harms way in a hurry.

There have been nesting areas found of the Carmel Spider with some chilling discoveries. They are known to use human hairs to line their nesting grounds. They may have found them in various areas of a home. They may also have clipped them from a person and this wasn’t even known.

They can be hard to get rid of due to the many hiding places they find in a home. Some families have had to leave their homes after all efforts to successfully exterminate these Camel Spiders have failed.

They can create a hissing sound too when they feel that they are in danger. This is a warning to be able to get them out of a difficult situation.

You will find these Spiders living in very dry conditions. The hotter the better for them as they love the heat and the desert regions. They are able to survive in some remote locations where there are only a handful of living things there. The versatility of them when it comes to habitat is certainly a driving force behind them living for millions of years.

What is surprising is that they don’t live in Australia. Even though this is a very hot location none of them have been found here. Yet it is home to a wide variety of other forms of Spiders. Many experts are amazed that they simply have had no sightings of this particular one around.

The flexibility of these Spiders also makes them well known in the grasslands and forest areas. Not everyone is aware of this and that is why they end up not believing it is the same type of Spider that was seen. However, studies have confirmed this to be true. They also confirm that even in such regions they will be looking for the warmest regions to live in. 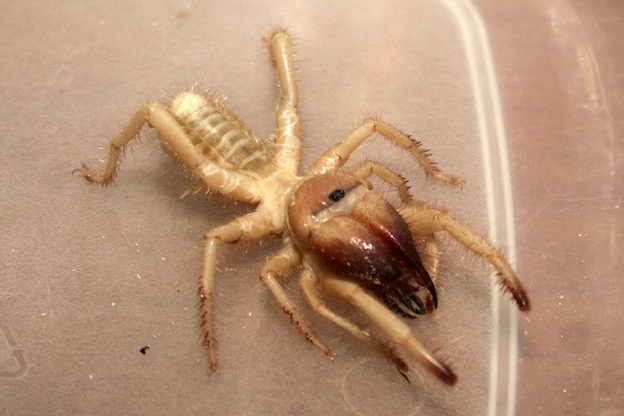 They never pass up any opportunity to feed either. Even when they aren’t hungry they will dine. They known all too well that there will be times when they are hard pressed to find food. They can store up fat on the body to live on in times when they don’t have much new food to consume.

They will eat both live insects and those that have been found dead. They may consume snakes, lizards, rodents, beetles, and termites. However, what they will eat often depends on location and the time of the year. They don’t seem to have any problem with successfully killing prey that is smaller than they are. They mainly come out to hunt for food at night.

The males are able to release sperm that the females will use to mix with her eggs. She is going to dig a burrow in the ground where she can safely deposit her eggs. She can have up to 200 of them at a time or as few as 50.

She has to consume extra food before mating too so that she has fat to live on. She won’t leave the burrow where she has placed her eggs. From the time they are deposited until they hatch she will be right there with them. If she didn’t eat enough before mating though she may die during this waiting period of several weeks.

How dangerous is the Camel Spider? That depends on who you ask about it. There are many legends out there about them being extremely dangerous. However, the research on the subject shows something else.

There isn’t any truth found to them biting humans in an effort to be able to consume their flesh. They aren’t out there known to be aggressive in nature to humans. Instead, they do bite when they are stressed or they feel threatened. This type of bite is one that is very painful though. There is going to be no question if it happens that something got you.

Even tough the venom won’t cause death, there can be a large wound that develops on the body. Treatment has to take place then to make sure an infection won’t occur within that wound. This can be very tricky because the infection can rapidly spread throughout the body if it isn’t closely monitored.

There will usually be pain medications, steroids, and antibiotics given to help ensure the wound stays clean. Sterile wraps will have to be applied too until the wound has healed enough to reduce the risk of various particles entering it.